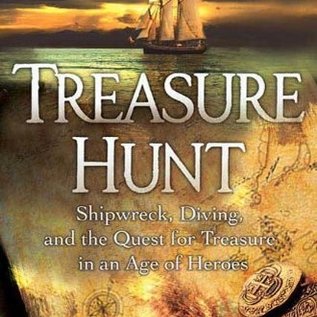 Treasure Hunt is the story of an obsession. Rumors of Spanish treasure, or gold and silver at the bottom of the sea, have been a part of maritime lore for centuries. In 1687, Captain William Phips brought back to port an incredible cargo---nearly forty tons of silver and gold---the treasure of the Spanish galleon Concepción, wrecked over forty years before on a coral reef in the middle of the ocean. The unimaginable had become real, and the great treasure-hunting boom had begun.

Soon after Phips's success, there were numerous expeditions that meant to emulate his stunning achievement. During that same time there was also a boom in the invention of crude and often very dangerous diving equipment. Many of these new projects were promoted on the infant stock market, where gambling and treasure hunting became closely connected with the birth of modern capitalism.

By the eighteenth and nineteenth centuries, treasure hunting had become a professional occupation, with a new breed of diver emerging. Much of their time was spent salvaging the wrecks of English and Dutch East-Indiamen carrying treasure to finance business in Asia. Ever since, men have been prepared to risk life and fortune in the search for underwater riches.

The author of numerous books of maritime history, including The Pirate Wars and The Sack of Panamá, world-renowned historian Peter Earle returns with an extraordinary and little-known history---of outstanding bravery, of exceptional recklessness, and above all, of the unquenchable lust for treasure.