Seven Superstorms of the Northeast: And Other Blizzards, Hurricanes & Tempests

Home / Seven Superstorms of the Northeast: And Other Blizzards, Hurricanes & Tempests 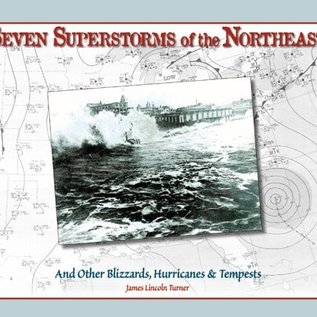 From the Blizzard of 1888 to the Great Appalachian Storm of 1950, this book reveals the majesty and terror of true superstorms in the mid-Atlantic and New England. Not just for weather buffs (though filled with meteorological details), this book is for anyone who is fascinated by breathtaking accounts of natural forces at their most powerful. Seven Superstorms of the Northeast takes readers on a wild ride through some of the region's historically most destructive storms -- in a pre-Weather Channel, pre-satellite, pre-Doppler-radar world. The book's title stems from seven monster storms including the blizzards of 1888, 1899, and 1914, the Snow Cloudburst of 1947, the Great Appalachian southeaster of 1950, and the hurricanes of 1938 and 1944. Sprinkled around the jaw-dropping accounts of these superstorms are stories of lesser, but no less impressive, storms such as the two August hurricanes of 1893 and other storms of the winter of 1913-1914.

This is a book where storms become legends.