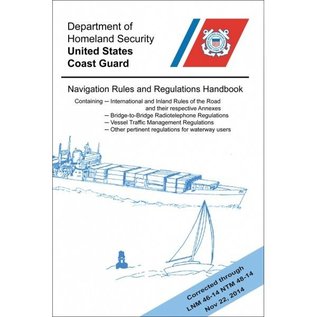 The International Rules in this book were formalized in the Convention on the International Regulations for Preventing Collisions at Sea, 1972, and became effective on July 15, 1977. The Rules (commonly called 72 COLREGS) are part of the Convention, and vessels flying the flags of states ratifying the treaty are bound to the Rules. The United States has ratified this treaty and all United States flag vessels must adhere to these Rules where applicable. President Gerald R. Ford proclaimed 72 COLREGS and the Congress adopted them as the International Navigational Rules Act of 1977. The 72 COLREGS were developed by the Inter-Governmental Maritime.

Inland Regulations
The Inland Rules in this book replace the old Inland Rules, Western Rivers Rules, Great Lakes Rules, their respective pilot rules and interpretive rules, and parts of the Motorboat Act of 1940. Many of the old navigation rules were originally enacted in the 1800’s. Occasionally, provisions were added to cope with the increasing complexities of water transportation. Eventually, the navigation rules for United States inland waterways became such a confusing patchwork of requirements that in the 1960’s several attempts were made to revise and simplify them. These attempts were not successful.
Following the signing of the Convention on the International Regulations for Preventing Collisions at Sea, 1972, a new effort was made to unify and update the various inland navigation rules. This effort culminated in the enactment of the Inland Navigational Rules Act of 1980. This legislation sets out Rules 1 through 38 - the main body of the Rules. The five Annexes were published as regulations. It is important to note that with the exception of Annex V to the Inland Rules, the International and Inland Rules and Annexes are very similar in both content and format.

This Handbook supersedes Commandant Instruction M16672.2D, Navigation Rules: International Inland. It maintains the same format and provides additional and updated content. Not all U.S. Navigation Regulations found in Title 33 of the Code of Federal Regulations are contained in this handbook.