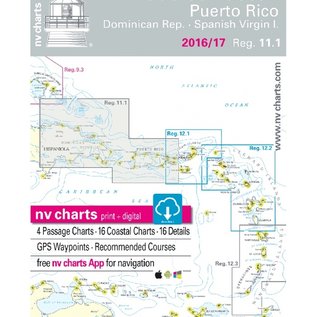 The nv-charts are characterised by fine contours and easy to distinguish colour graduations of the depth lines – turquoise for coral reefs, red for the 2-meter-line and blue for the 5-m-areas.

Presented in a handy, user friendly size, (23½’’ x 16 ½’’) a thick plastic envelope protects the charts, enabling them to be easily stored.

The importance of good graphical representation of the topography when sailing in the Caribbean is essential.

NV Charts nautical charts are regarded by charter fleets, recreational sailors, and professional mariners as the authoritative Caribbean nautical charts. NV Charts offer greater accuracy, detail, updates, and reliability than any other cartography covering the Bahamas, Virgin Islands, Leeward Islands, Windward Islands, and Puerto Rico. Nobody knows the Caribbean like NV Charts; our nautical charts are created with a keen eye for meticulous detail and incorporate precise local knowledge using the very best available data. This data is often supplemented and enhanced with NV Charts’ own detailed survey data of navigable waters outside of the main fairways, particularly valuable in the Bahamas where there are many shallow areas and shifting channels and sandbars. NV nautical charts are remarkably detailed, and available in paper and digital formats for use with PCs and mobile devices including tablets, Android and Apple iOS systems (with free app), and on digital plotter SD/microSD cards.  Now available for the first time ever, NV Charts offers exclusive, highly accurate nautical charts for Cuba. For decades, NV Charts have been the preferred nautical charts for the Caribbean. NV Charts’ accuracy and reliability also makes them the choice of the U.S. Coast Guard and Pilot associations in Germany.