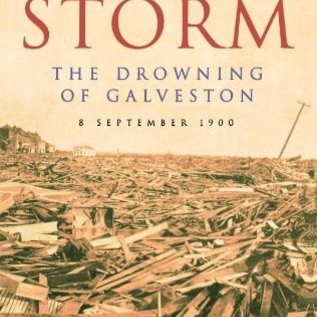 Galveston, Texas, 8 September 1900. It's another fine day in the Gulf according to Isaac Cline, chief observer of the new US Weather Bureau, but one day later, 6-10,000 people were dead, wiped out by the biggest storm the coast of America had ever witnessed. Isaac Cline was confident of his ability to predict the weather: he had new technology at his disposal, 'perfect science', and, like America itself, he was sure that he was in control of his world, that the new century would be the American century, that the future was man's to command. And the coastal city of Galveston was a prosperous, enthusiastic place - a jewel of progress and contentment, a model for the new century. The storm blew up in Cuba. It was, in modern jargon, an X-storm - an extreme hurricane - and it did not circle around the Gulf of Mexicao as storms routinely did. On 8 September 1900 it ploughed straight into Galveston. It was the meteorological equivalent of the Big One. It was to be the worst natural disaster ever to befall America to this day: between six and ten thousand people died, including Isaac Cline's wife and unborn child. With them died Cline's and America's hubris: the storm had simply blown them away. Told with a novelist's skill this is the true story of an awful and terrible natural catastrophe.