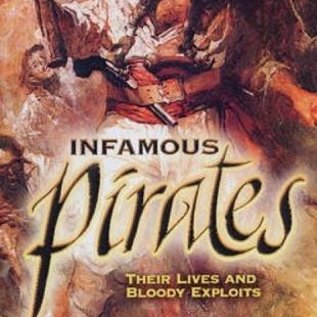 Despite his relatively conventional background—wealthy family, excellent education—Captain Misson of Provence went to sea at age sixteen, and in following his utopian vision became one of the forebears of the French Revolution. When, due to misadventure, he became the saintly pirate captain of the ship Victoire (renamed Republic of the Sea), he and his crew hoisted their own version of the Jolly Roger—a pure white flag with the motto "For God and Liberty." A legendary figure in the annals of piracy, his story has captured the imaginations of writers as diverse as Daniel Defoe and William S. Burroughs. Lord Byron was said to have written of him, "He was the mildest-mannered man that ever scuttled a ship or cut a throat." While some accounts of his life differ, Captain Kidd (Robert, also known as William)—a native Scot who later settled in New York—was a privateersman hired by the Governor General of the Colonies to hunt down pirates. When he failed to fulfill his mission and was deemed a pirate himself, he was eventually captured and ignominiously hanged at London's Execution Dock for the very crimes he was meant to eradicate.
These are among the many tales of history's most notorious pirates presented in this volume. Originally published in the nineteenth century—when these outlaws were still the scourge of the high seas—this collection is packed with true accounts of extraordinary exploits and grim executions, vicious battles and gruesome bloodshed, soaring triumphs and stinging defeats.