Women Were Pirates Too

Home / Women Were Pirates Too 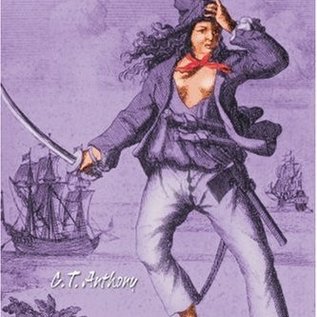 From women who fought alongside the men in dastardly high-sea robberies, to an Irish heroine who plundered British ships, to women unfortunate enough to fall amongst thieves, captured and virtually cast into a life of ill-gotten gain, this book explores some long overlooked characters in the history of piracy. Women haven't always played the mere role of passenger aboard ships -- there were those who commanded them. In fact, one of history's most notorious pirates was Madame Ching, whose fleet involved thousands of war junks that literally ruled the southern coasts of China in 1809. Scandinavian princess Alwilda's adventures as a pirate have made her name legendary in the northern seas, and Ireland's Grace O'Malley is a much-documented heroine, whose brave fighting exploits in the late 1500s, both on land and sea, earned her the respect of the British throne. And during the final throes of Western piracy, Mary Read and Anne Bonny cruised the Caribbean, disguised as men and committing deeds that earned them death sentences upon their capture.