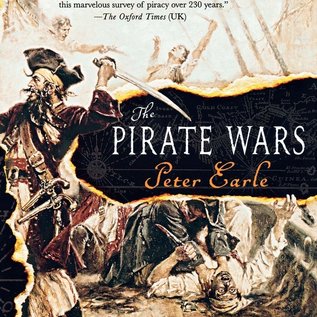 The Pirate Wars takes the romantic fable of oceangoing Robin Hoods sailing under the "banner of King Death" and contrasts it with the murderous reality of robbery, torture, and murder on the high seas. Noted maritime historian Peter Earle charts centuries of piracy, from Cornwall to the Caribbean, from the sixteenth century to the hanging of the last pirate captain in Boston in 1835. Along the way, we meet characters like Edward Teach, the notorious "Blackbeard," the treasure-hungry Captain Kidd, the dreaded corsairs of Barbary, and the defiant buccaneers of the West Indies.
The Pirate Wars is an account of the golden age of pirates and of the men of the legitimate navies of the world charged with the task of finally bringing these cutthroats to justice.