Columbia River - Gateway to the West 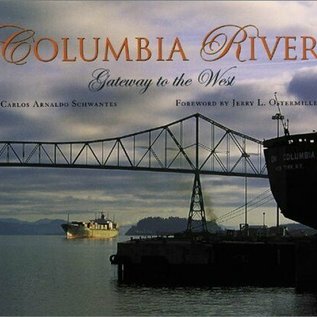 Carlos Schwantes takes the reader on a voyage of discovery along the Great River of the West -- the Columbia. Through his personal text and photographs, along with additional color photographs by Steve Eltinge and Ralph Lee Hopkins, Schwantes tells a story expressing the essence of the Columbia River and its personality and living characteristics as a river at once beautiful, changeable, and wildly dangerous.

The Columbia River begins its journey to the Pacific Ocean in the melting snow of the Rocky Mountains of British Columbia. Mixing with tributary streams and rivers, the Columbia drains an area spanning 250,000 square miles from distant origins as far removed as Revelstoke, British Columbia; Kelso, Washington; and Jackson, Wyoming. Upon reaching the Pacific, the Great River of the West is four miles wide and hundreds of feet deep.

Schwantes describes the history of the Columbia from its first, yet unreported, discovery by Spanish explorer Bruno de Heceta to the present with its mighty dams and important seaports as far inland as Lewiston, Idaho. Readers will enjoy the various eras of the river discussed -- its discovery by the western world, how it assisted immigrants, carried steamboat vacationers, ferried goods to settlers and harvests to the rest of the world, and the modern damming of its powerful currents for electricity and irrigation. Explorers, fur traders, miners, immigrants, engineers, fishers, and tourists colorfully tell the story of a river that at times seems larger than life.

Published in conjunction with the Columbia River Maritime Museum in Astoria, Oregon, Columbia River: Gateway to the West makes a significant contribution to the history of a river.