Rather than deal with multiple Army Corps of Engineers District Offices, let Pilothouse be your one-stop shop. We can supply any ACOE chart book, including those ACOE has allowed to go out-of-print, which we obtain in Print-on-demand. 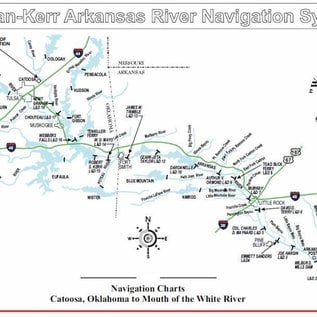 The McClellan–Kerr Arkansas River Navigation System (MKARNS) is part of the inland waterway system originating at the Tulsa Port of Catoosa and running southeast through Oklahoma and Arkansas to the Mississippi River. It is operated by the Corps of Engineers.
Though it primarily follows the Arkansas River, it also follows portions of the Verdigris River in Oklahoma and the White River in Arkansas. It also includes the Arkansas Post Canal, a short canal named for nearby Arkansas Post National Memorial, connecting the Arkansas and White Rivers.