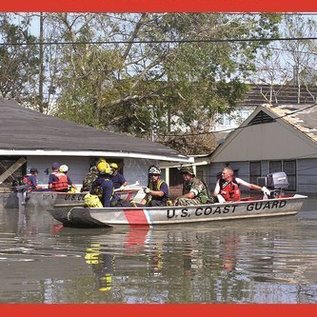 From a city's darkest hour comes an amazing tale of bravery!
With disaster scenarios of increasing interest and disaster preparedness paramount importance, it’s time to take a deeper look at what went very right before, during, and after Hurricane Katrina. Unlike the woefully unprepared civilian population, the Coast Guard was staged and ready. The unprecedented surface rescue put into action under Capt. Mueller and RADM Castillo took place with little fanfare, and saved the lives of 25,000 people by boat and 8,500 by helicopter.
“I personally led the Coast Guard boat rescue operation in the wake of hurricane Katrina . . . the largest and most successful rescue operation in American history. This book is the story of the Coast Guard rescue operation in the flooded city of New Orleans and the surrounding area after Hurricane Katrina, but it’s much more than that.”             —Capt. Robert G. Mueller, U.S. Coast Guard (ret.)
While other rescue operations struggled in the post-storm chaos of Hurricane Katrina, those men and women wearing the United States Coast Guard uniform powered through many obstacles—political, logistical, and physical – to save the lives of New Orleanians.  Thanks to the largest and most successful rescue operation in American history, the USCG saved 35,000 people using surface and aerial recovery tactics in the wake of Katrina.  With admiration and respect, CAPT Robert Mueller tells the intimate account of his experience as head of rescue operations and honors not only the “Coasties” but the citizens of a city affected by the worst natural disaster in its history.