Always on Station: The Story of the Sandy Hook Ship Pilots

Home / Always on Station: The Story of the Sandy Hook Ship Pilots 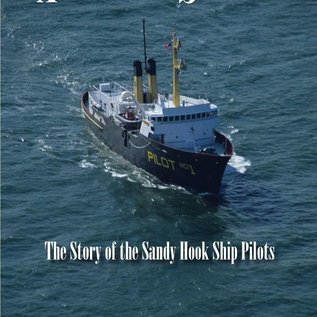 "ALWAYS ON STATION"THE STORY OF THE SANDY HOOK SHIP PILOTS
by Francis J. Duffy
In the earliest days of Dutch shipping, straight poles were used to check the water's depth, and the men who handled the poles at a professional level became known as pijl loads (pilots). When the great English explorer Henry Hudson, sailing for the Dutch, first came to the entrance of what is today New York Harbor in 1609, it is said he spent three days having the waters sounded by a pijl load before moving into the river that now carries his name. The mate on his HALF MOON, Robert Juet, reported finding a navigable passage close to a narrow spit of land shaped like a fishhook, turning inward from the sea, and he called the place Sant Hoek, a name that survives today as Sandy Hook, New Jersey.
There are few organizations in this country that can trace their founding to more than three hundred years ago as the Sandy Hook Pilots can. Their logo carries the date 1694. They served under two national flags: British and American. Over the centuries, the pilots have weathered many changes, but the United New York and New Jersey Sandy Hook Pilots Benevolent Association is still safely guiding ships across the bar as they enter and leave the Port of New York and New Jersey. (The "bar" of sand and mud at the entrance to the port is a shoal with depth dependent on weather, tides, moons phases and even wrecked vessels.)
This book follows the pilots' organization from its founding. Every change in the maritime industry has had repercussions for the pilots, from the changing of sailing ships to steamships to the present-day containerization of cargoes. The apprenticeship training needed to qualify as a pilot has gone from requiring time at sea under sail to today's holding of college degrees and working with electronics and computers. The pilots also carry on many traditions like dressing as businessmen when boarding ships from small launches via Jacob's ladders. The years are full of instances of pilots answering calls to make heroic rescues at sea to save life and property. The pilots have taken the basic tenets of an ancient trade guild and adapted it for today's world, working together to provide a highly skilled service needed in the twenty-first century.
"This is the best book on ship pilotage I have seen. It was written by an author whose knowledge of the sea and shipping is readily obvious." —Captain Jim McNamara, President, National Cargo Bureau, New York City
80 pages, illustrated, 7 x 10, index, 2008 $17.50 paperback